Berry and banana filled Aquafaba French Toast Casserole – an egg & dairy free twist that everyone will love! Prep this over night for an impressive but easy breakfast/brunch! Gluten Free + Vegan 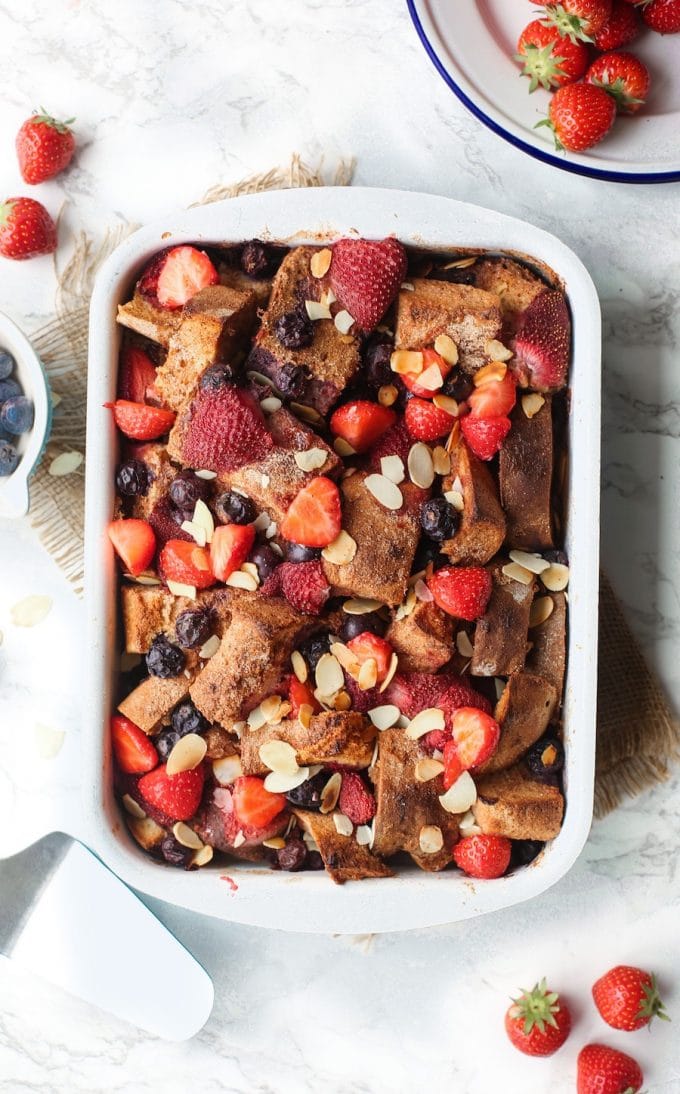 Have I ever told you my love for French toast?

Well let me tell you, friends. That love is real and it’s deep and I’m sharing it with you today in the form of this Aquafaba French Toast Casserole! 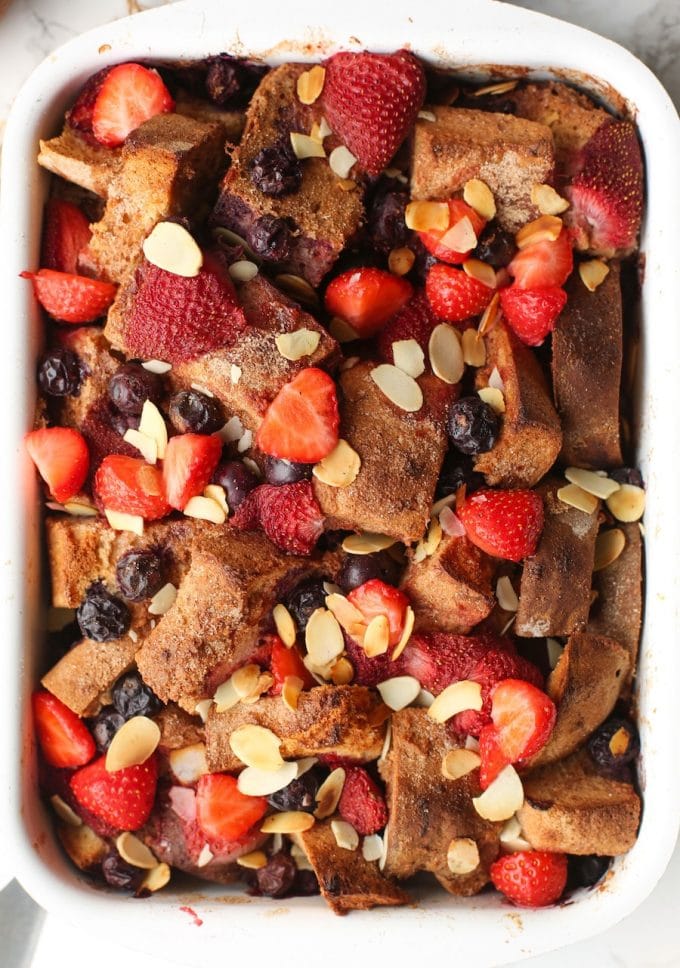 The base of this batter is made up of a few things here:

If you’re unfamiliar, aquafaba literally means bean water – as in the water that you and I used to pour down the sink when draining a can of chickpeas. This website answers a lot of the questions you might have on aquafaba, but basically what you need to know is that the water from the chickpea cans mimic the proteins in egg whites making it a really great egg substitute for things like meringue or mousse. Cool, huh? 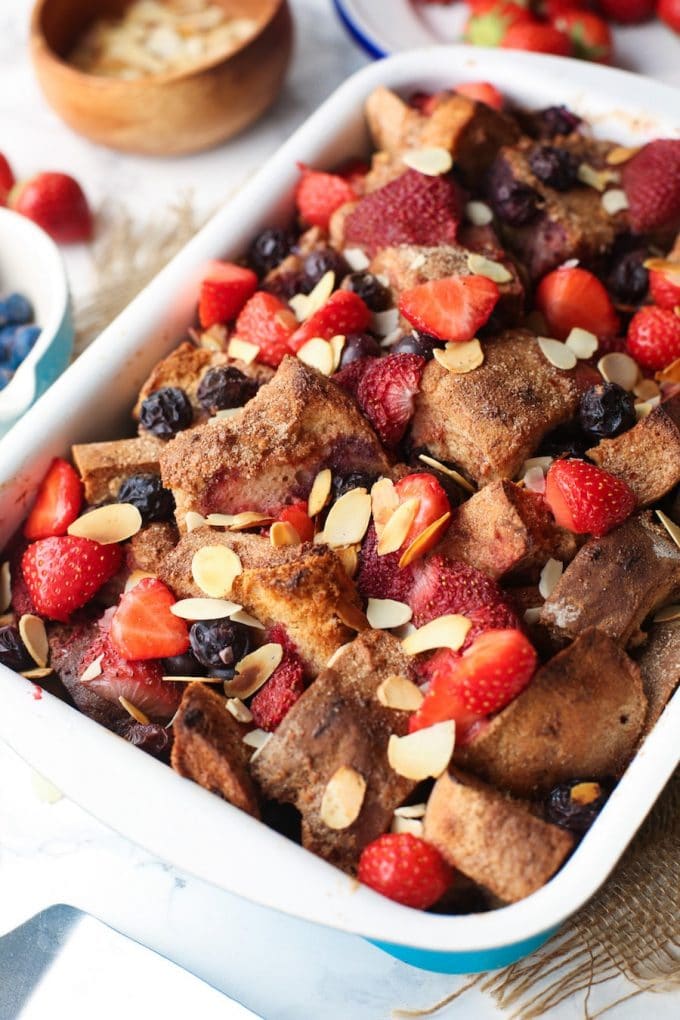 For the bread I recommend finding an uncut loaf of bread so that you can cut them into thick 1 inch sized chunks. If it’s too thin it just ends up drowning in the batter resulting in a sad and soggy mess that’s not fun for anyone to eat. It’s also a good idea to let your bread go a little stale before using. French toast in general does better with old bread that reinvigorates itself as it soaks up your batter.

Make this in the evening and let soak overnight for an easy breakfast in the morning. Just pull it out when you’re ready to bake and throw it in the oven for about an hour. Easy!

The breakfast of my dreams. 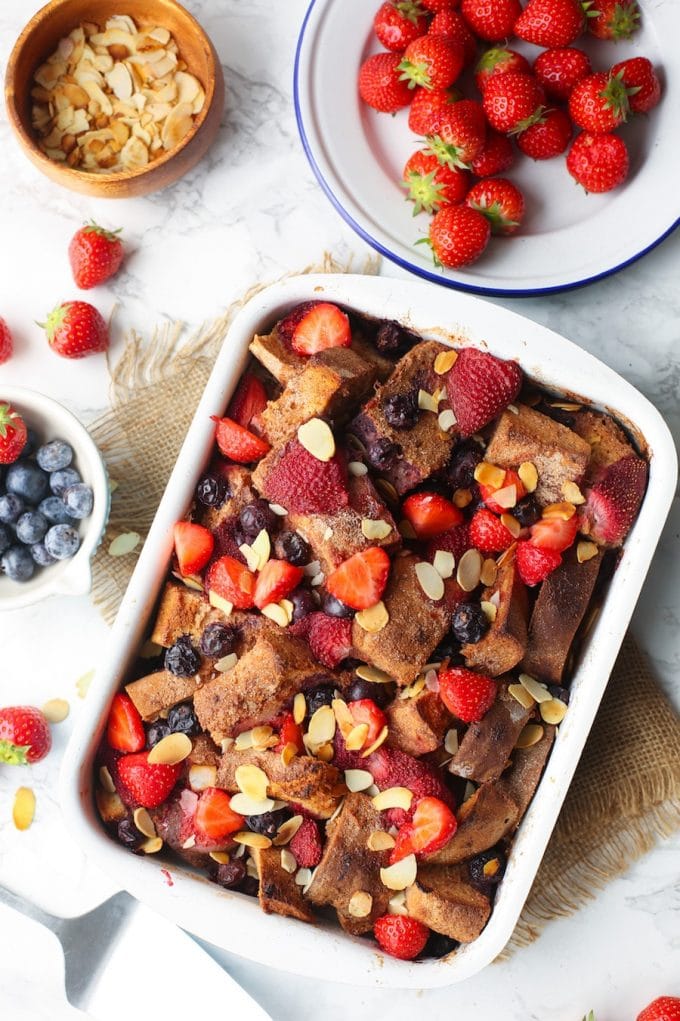 This right here is why breakfast food = best food!

Don’t forget to #asaucykitchen on instagram if you try this Aquafaba French Toast Casserole! We love seeing what you make!  You can also post your pictures to my facebook page!

Make sure the bread you use is cut into thick slices - if it's too thin it you might end up with a mushy French Toast Casserole. It's also better to use bread that's slightly stale.

Make it fully vegan: make sure to use vegan bread.