Cut back on both calories and carbs by swapping out the bread crumbs for riced cauliflower in this Fig & Sausage Cauliflower Stuffing! This stuffing makes for a delicious, low carb alternative to add to your holiday menu! Gluten Free + Paleo + Whole30 Friendly 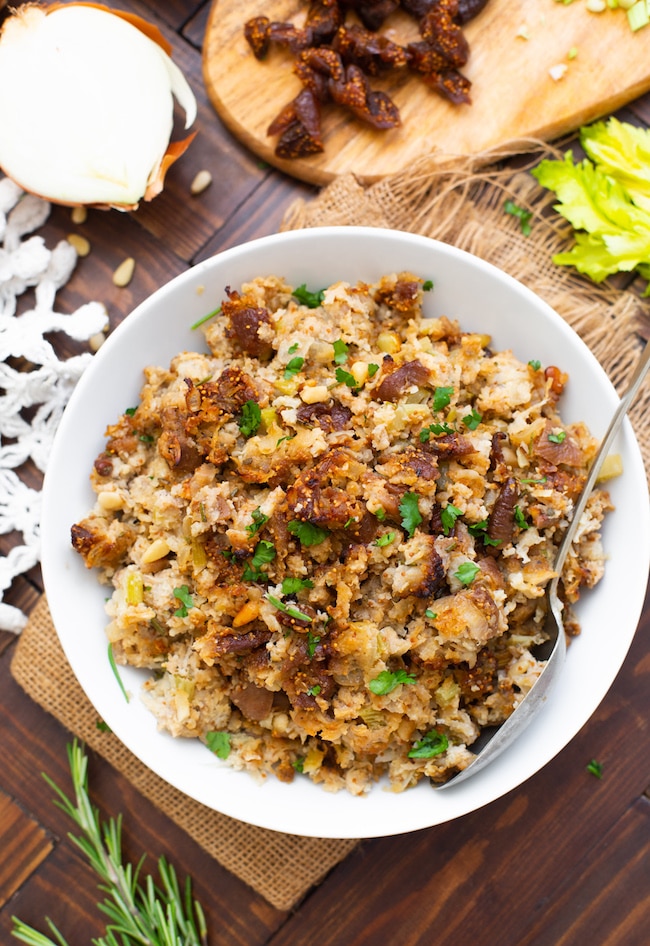 I’m a stuffing person and this Fig & Sausage Cauliflower Stuffing has me completely and utterly convinced. Who’d have thought a cauliflower stuffing would be the one to do it? I know it may not look like much (stuffing never does) but believe me when I tell you that this is some next level stuff right here. 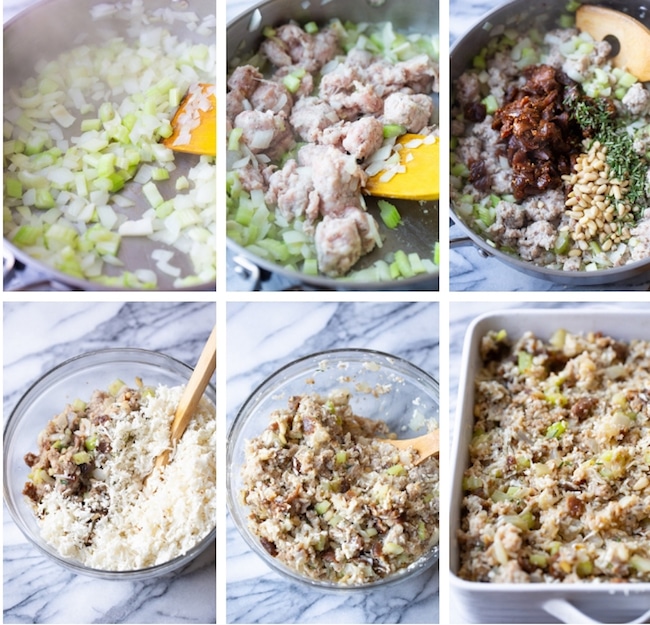 This recipe is adapted from the fig and sausage stuffing in the turkey roulade that I shared a couple weeks back. It was so good I had to come up with an excuse to keep playing around with the recipes which is how we landed on this lower carb cauliflower version. The base recipe is very similar with the main difference being the use of riced cauliflower over bread crumbs.

How to Make Cauliflower Rice

By far the fastest/easiest way to make riced cauliflower is with a food processor. It takes about two minutes to cut up the cauliflower into small chunks and then drop it through the graters. If you don’t have the grating blade you can also make this by pulsing it up with the standard S-blade.

If you don’t own a food processor – no worries! You can still do this a couple different ways.

Chop up the cauliflower florets into little bite sized pieces and pulse them in a standard blender. The caveat here is that you usually need to make this in batches to evenly blitz up the cauliflower but it’s still a fairly easy process altogether.

That all being said, you absolutely do not need to invest in any large, expensive kitchen appliances to make this dish. For years I’ve been making my own cauliflower rice with nothing more than a cheese grater. Instead of cutting up your cauliflower head into small pieces just chop it up in half or into quarters and grate it using the larger holes on your standard box grater. It takes a little more elbow grease but really isn’t difficult.

And of course if you’re short on time or just want something fast, easy and without loads of clean up you can just go ahead and buy pre riced cauliflower.

Once you’ve got your cauliflower rice made you need to prep it for stuffing. Since cauliflower has such a high water content it’s important to dry some of that excess water out before adding it to your stuffing so that it doesn’t make everything soggy. Doing this is pretty easy – basically you just need to roast the prepped rice in the oven for about 10-12 minutes. Just spread it out across a baking sheet and pop it in the oven. Easy!

Moving on… add the figs and apple juice to a small pot. Let that mixture cook and reduce down for about 5-10 minutes. While that’s simmering on the stove you can start chopping your vegetables. Dice up your onion and celery and then sauté those in a large skillet with some olive oil for about 5ish minutes. Add the sausage to the pan and break it up into crumbled bits.

After about 10 minutes add the juice-fig mixture to the sausage mixture along with the rosemary and pine nuts. Mix well and cook as your kitchen begins to smell more and more like actual heaven.

Transfer the sausage mixture to a large bowl and add the cauliflower, chicken stock and egg. Mix well.

At this point all you need to do is transfer the stuffing to a large baking dish and pop it in the oven to bake for about 40ish minutes. About halfway through the cook time you will need to remove the dish from the oven briefly to stir and that’s it. When it’s done the top should be golden brown and slightly dry on top with moisture underneath. 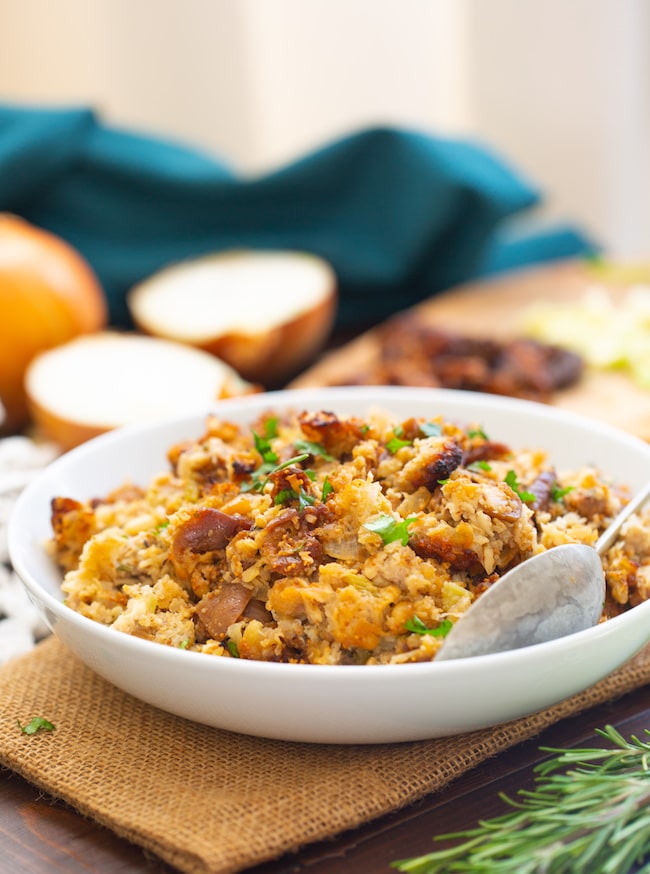 Don’t forget to #asaucykitchen on instagram if you try making this Fig & Sausage Cauliflower Stuffing!  I love seeing what you make!  You can also post your pictures to my facebook page!