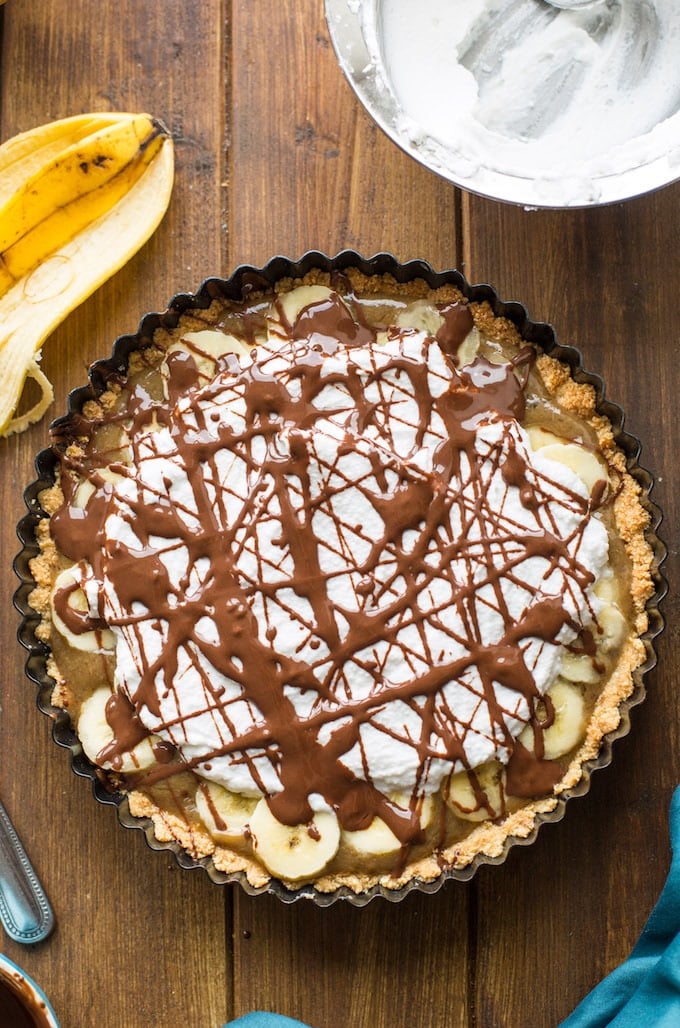 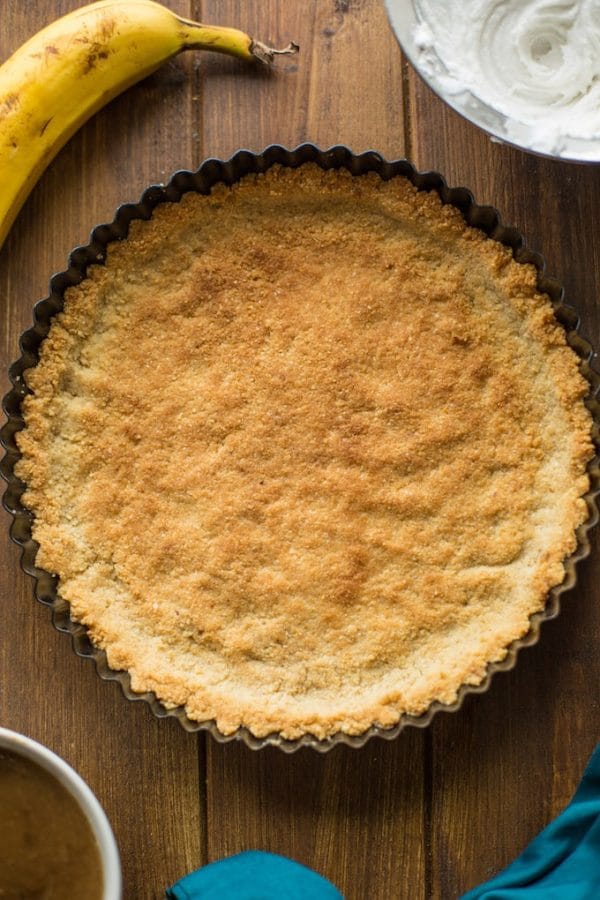 First things first: our silky, toffee filling. More accurately in this case it’s a banana-coconut caramel. One ripened banana blended together with a can of coconut milk and then reduced down with a little coconut sugar until it transforms in a thick, rich, sweetened banana caramel.

Adding the banana straight to the caramel not only infuses a little extra banana flavour into the finished product but it also means that we don’t need to add as much coconut sugar to the actual caramel since bananas are so naturally sweet. They’re like natures candy.

The caramel takes the longest to make – it needs to simmer/gently boil for at least 30 minutes on the stove top. I recommend starting that first and then working on your crust as that reduces down. You can also make the caramel up to two weeks to break up the work and help the pie making process speed along even more. 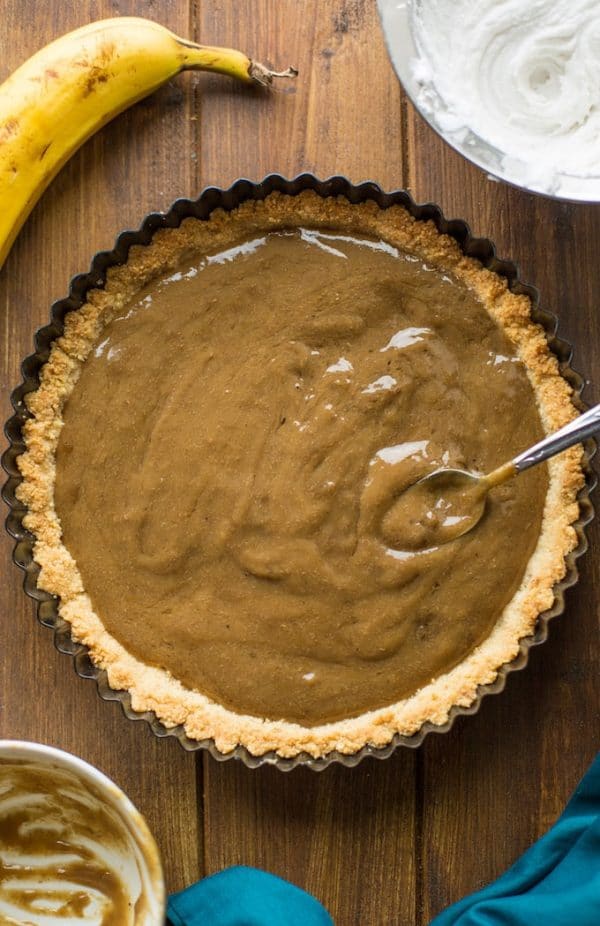 Once your banana caramel is on it’s way you can begin working on the almond flour crust.

In a blender or food processor blitz together your almond flour, cinnamon and shredded coconut until the coconut breaks down and a sand-like texture forms. Add in the melted coconut oil and maple and continue pulsing until it all comes together to form a sticky dough. From that point it’s just a matter of pressing the dough into a tart pan and baking until the crust is lightly golden.

After removing it from the oven let the crust cool on a wire rack before you’re ready to assemble. 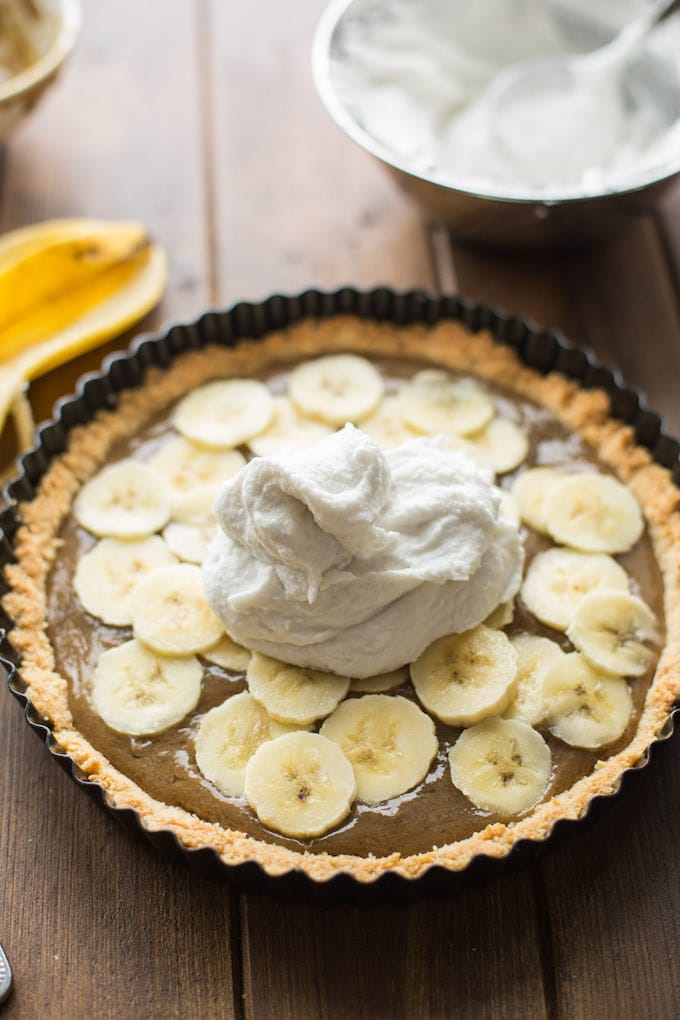 Make sure you pop a can of coconut milk in the fridge the night before attempting the coconut whipped cream. You want to make sure the can is nice and cold so that you can easily scoop the coconut cream out of the top before whipping. I don’t recommend using lite or low fat coconut milk for this because they never quite whip the same way.

If you like things a little more on the sweet side feel free to add a tablespoon or two of maple syrup (or honey if you don’t need this to be vegan) to coconut cream. Personally we liked it without because the bananas and caramel provide a lot of added sweetness, but that is totally up to you! 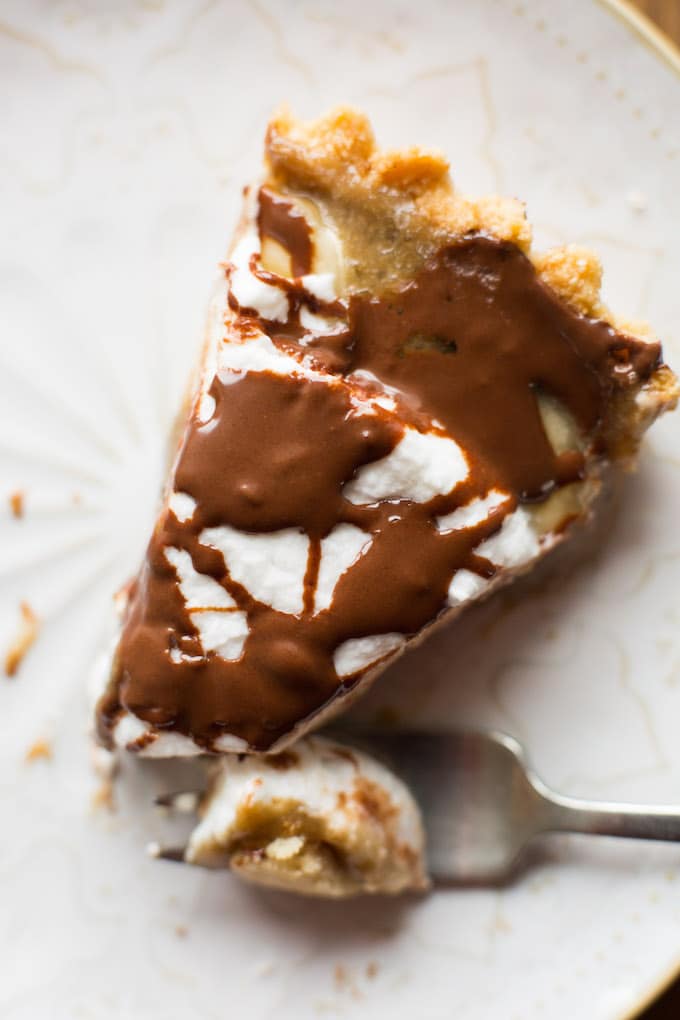 A stick, creamy, decedent  vegan banoffee pie with a healthy twist made with only 10 ingredients!

Don’t forget to #asaucykitchen on instagram if you try this Paleo + Vegan Banoffee Pie!  I’d love to see what you make with it!  You can also post your pictures to my facebook page!

You can make the caramel up to two weeks in advance. Just store it covered in the fridge until you need it. It will thicken in the fridge so give it a quick stir before using so it's easier to spread.

Feel free to use pre made coconut cream like So Delicious

Coconut cream tip from one of my readers: shake the can to make sure the cream isn’t already separated. The refrigerate the can upside down. Gently turn it right side up before opening and all the liquid will be on top and can just be poured out, leaving only the cream in the can.